Well, it was my turn to plan our anniversary. I decided it would be fun to take J mountain biking in Moab. Apparently I forgot that our anniversary happens to fall in the middle of the summer and Moab is HOT with a capital HOT!!! We had fun despite biking on what felt like the surface of the sun. 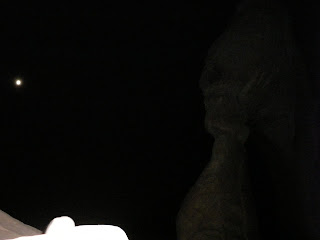 The first night we arrived pretty late. We thought it would be fun to hike to Delicate Arch under the full moon. I had been there twice before...both in the daytime. We got pretty lost and I was so nervous of walking off a cliff. There are some pretty big drop offs in the area. We finally found the arch after a little guidance from another group with headlamps on. We were able to see the light and follow it. So glad those people were on the straight and narrow that evening to be a beacon for us :) We were the only people at the arch when we arrived. It was pretty cool to see the arch's silhouette under a full moon. Unfortunately I didn't have a tripod...so this is the best pic I could get. 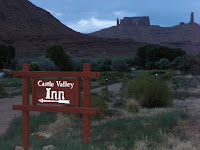 a very cute B&B called Castle Valley Inn. It was 17 miles from Moab but beggars can't be choosers on the 4th of July weekend! I would definitely stay there again. The hosts very fabulous, the breakfast was great and the rooms very comfy. They even had a hot tub that we might have thought about using if we were there in November or December! 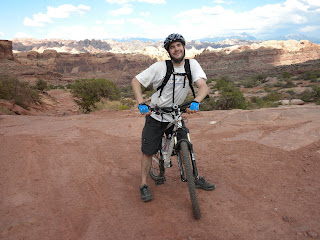 The first day there we rode a trail called Amasa Back. It was described as an out and back ride... it should have been called the UP and back down ride! The "out" was a long, uphill climb. We took several breaks and even had to walk up some of the areas. The view was amazing and it was nice to be out on our bikes :) For some reason we always find ourselves on top of mountains!! I guess we just like feeling like we're on top of the world. The ride down was awesome. We were in a bit of a hurry because we saw some storm clouds & lightning moving in and we didn't want our trail to turn into slippery mud. We hightailed it down the trail as fast as we could and made it back to the car just before the clouds were overhead.

The next day I planned to ride Slick Rock. You can't go to Moab and not go to the most famous mountain biking trail in the wo 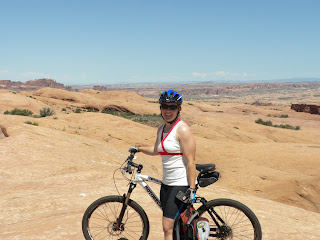 rld. We got out there a little later than planned and were surprised to be one of two cars in the parking lot. We thought that was VERY odd considering it was the 4th of July weekend. We found the heat to be quite unbearable and decided everyone else in the world knew to come early or wait until winter time. We know for next time I suppose!!

This trail was much longer than I remembered and much more difficult! There are some very steep climbs and some very steep downhill. I was a little intimidated in some sections...especially because I haven't had a ton of mtb experience. By the end of the ride I started to feel a lot more comfortable on my bike and 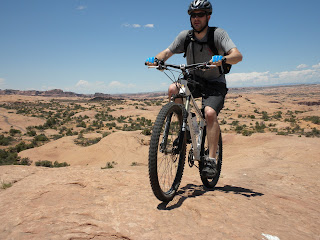 would love to do the ride again in January.

The slick rock is amazing! You can truly defy gravity because the bike tires seem to stick to the rocks! You can do steeper sections on the slick rock than anywhere else in the world because there is so much friction.

We used all of our water and were very happy to see the parking lot when we returned. We did see four or five other groups that were as crazy as we were to be baking on the rocks in 114 degree temps!

On the last few miles of the ride J and I started planning our anniversary for next year...and it doesn't include temps over 85 F or 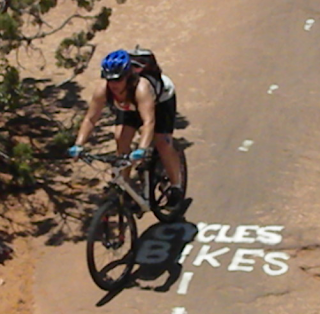 mountain biking. We decided that something relaxing is in order. We always seem to come home more worn out than before we left.

All in all...a successful trip. We made it through two years of marriage...and had a good time celebrating it. Next up...3 years!
Posted by Kristen B. at 10:38 PM