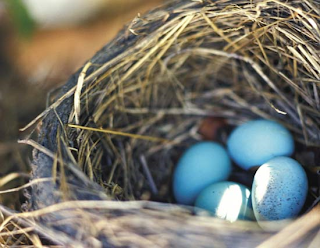 We have been doing a ton of yard work lately...mostly sprinklers this month. We found a robins nest in my ground covers and tried to leave it alone. It was difficult to leave it undisturbed because it was a few feet from the trench we were digging. When we weren't looking Koda decided to investigate the anomaly herself. When we realized what she was doing it was too late because she had already chewed an egg and scared the mommy bird away. There were still 9 eggs in the nest but the momma bird never returned. The nest still sits there (weeks later) with unhatched eggs. I was pretty sad that these birds never hatched!!

To make matters worse, I found a brand new baby bird on my lawn. My first thought was that one of the eggs Koda took from the nest actually hatched! I thought for a second about how impossible that would be. The next possibility was that it fell from the tree. I looked up and didn't see anything at first. I heard a ton of little chirps and looked harder. I saw a nest about 25 feet high in the tree. It was so sad to think that the little chick fell from that height! There was no way to put the bird back in the nest. I didn't want to scare another momma bird away. I made a bed of grass for the bird and put it in the shade so it didn't bake in the sun. The bird didn't look so great...it was starting to grow 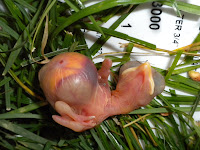 feathers on its back but its belly was really bloated. My guess is that it was swollen from the impact of hitting the ground :(

I left it outside overnight and when I checked on it the next morning its eyes started to open and its beak was opening and closing!! J and I found some worms, crushed them up and put them in the beak of the bird. It was so cool because the bird actually swallowed the worms! It gave me a little hope that we could save the bird. Unfortunately it ended up dying later that afternoon.

Sorry if you thought this story was going to have a happy ending! It's not everyday you get to see a baby bird like this.
Posted by Kristen B. at 8:18 PM