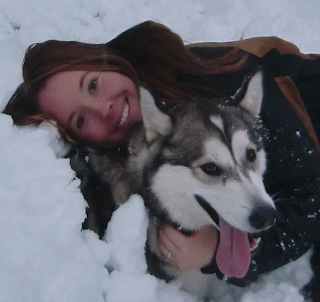 Our puppy is so curious. One of her favorite things to do last summer was to chase deer (see previous post about mountain goats!). Anyhow, a few nights ago I decided to take Koda for a walk because we hadn't been great at getting her out.

It was 9 pm so the sun was setting but there was still enough light to see where we were going. Koda prefers the cooler weather over the hot weather so 9 pm would be enjoyable for her. She darted out the front door in a frenzy to get outside. Her tail was going nuts and she was so excited that someone was taking her out.

We don't use a leash with her anymore to take her on walks. A while back we purchased a shock collar (best purchase we ever made!!) and she behaves fabulously now :) We rarely have to actually use the shock collar...but it's there just in case. She listens really well and is pretty good about staying close unless there are deer in the vicinity.

I decided to take Koda into the hills because she loves to run and explore. I walk on the trail and she runs many more miles because she has to sniff all the bushes and trees. She also loves to chase rocks so I throw rocks up and down the hills to keep her running and hopefully wear her out. She seems to have an endless supply of energy. The doggy books recommend tying a car tire to our dog while she runs to exercise her. That's crazy...

It was starting to get pretty dark and I was trying to make my way back down the mountain so we could start heading home. There was no moon out and I could only see outlines of objects. My eyes aren't great i

Koda stuck her head in another bush and I heard a loud rattlesnake rattle! My heart jumped a beat or two, my feet jumped back about 5 feet and I screamed at Koda to "come"!!!!

She was at my side in an instant with her tail between her legs. I was terrified because we had to walk past the snake to get down the mountain or go back the way we came which would take a really long time. I couldn't see the snake on the road...but then again, I couldn't see the road really well. As far as I knew...the snake could be sitting in the middle of the road! More than likely the snake took off after we scared it....

I took a hold of Koda's collar, got the courage up and counted to three... On three we took off running past the spot where Koda discovered the rattlesnake... My adrenaline was pumping!!!

The rest of the walk was uneventful and it was very dark when we got home. Next time I will definitely take my head lamp so it's not so scary in the hills!

Rattlesnakes make me so nervous because they could kill our dog. I don't like snakes and I dislike rattlesnakes even more. They are so slimy and yucky!!!
Posted by Kristen B. at 9:38 PM