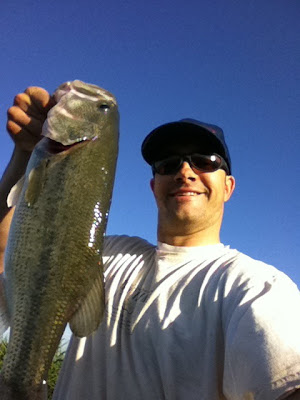 Got up and went to Utah Lake this morning. Got there for the sunrise but within about 5 minutes my trolling motor stopped working. Pulled it up and sure enough there was a ton of somebody's old fishing line coming out of it. Had to take the prop off and do surgery on it to get the bird's nest out of my prop. 20 minutes later I had it all cleaned up and put back together and running again. Not a good start to the day. I was cursing all those dumb catfisherman the entire time. Switched spots and drove to the north shore and started flipping my black/blue 1/2oz jig into the the edges of the weeds. Saw tons and tons of carp but I was there to try to get into some largemouth. I've read reports of there being some real nice ones in there but with such a huge lake, so much cover, and so much natural food they have been tough for me to catch. After about 30 minutes of flipping my jig into likely looking spots I pulled into a nice little pocket in the reeds about 15x25 feet. I made 3 or 4 uneventful casts and then on the 4th just as I was lifting my lure out of the water something big grabbed it. It about scared me to death. 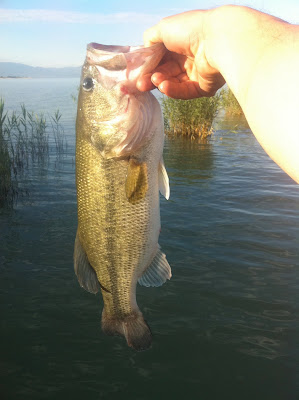 I literally had my lure about 3 feet from the end of my pole and was just lifting it out of the water when wham, the bass came up grabbed it and took off for the reeds. Once my heart started beating again I set the hook and tried to stop the fish before he made it to cover. Fortunately, I had the drag set pretty tight and was able to stop his run. When I had him turned back toward the boat he jumped and tried to shake the hook from his mouth. I thrust my rod tip into the water and muttered, "stay down" as water went flying everywhere. A few more cranks of the handle and I had the fish close enough to the boat to get him in. I thought about grabbing the net but decided to just lip him instead. I reached down and grabbed him by the bottom lip and lifted him into the boat. What a fish. I measured and weighed him at 19" and 3.9lbs. He was strong, fat and healthy. Shot a couple of pictures/video with my phone and put him back where he came from.